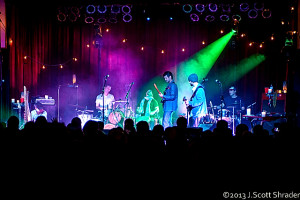 Toubab Krewe is a local favorite of Asheville, NC. The proof is in the large numbers that turn up at every show. Toubab actually means “foreigner” in several West African languages, including Bambara and Wolof but in this town they are considered the exact opposite. Their popularity may have originated in Asheville but their talent has gotten them as far as Bonnaroo Music Festival in Manchester, Tennessee. MerleFest, MagnoliaFest, High Sierra Music Festival, 10,000 Lakes Festival, Vegoose, Lotus World Music and Art Festival among countless 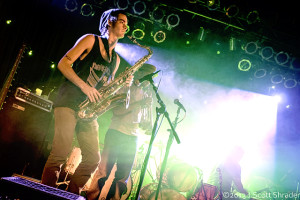 others. Toubab Krewe also performed in January 2007 at the Desert Music Festival in Essakane, Mali, Music on the Mountaintop in Boone, NC and at the 2009 Rothbury Music Festival, in Rothbury, MI, the 2009 Bear Creek Music Festival in Live Oak, FL. as well as their most recent performance on board Jam Cruise 8. In October 2010 Toubab Krewe performed at Voodoo Experience in New Orleans. Toubab Krewe recently performed at All Good Music Festival in Masontown, West Virginia, July 15, 2011. These musicians look like the run of the mill jamband but once you experience their musicianship of the plethora of unique instruments, you begin to change your mind about these boys. The group’s instrumentation includes kora which is a 21-string harp-lute, kamelengoni which is also a 12-string harp-lute, soku which is a Malian horsehair fiddle, two electric guitars, electric bass guitar, drum set, and smorgasbord of African percussion. The group has traveled to West Africa several times, working with local musicians to improve and better understand their passion. 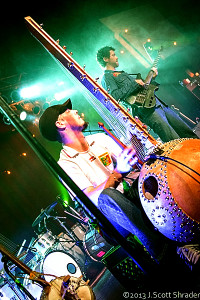 folk strains and more. It’s hard to classify them in any mainstream category because they exist on their own unbeaten path which is their own substrata. Toubab uses the essence of African legends such as Ali Farka Toure, Orchestra Baobab and Salif Keita, most likely picked up in their from their travels to study and live in Guinea, Ivory Coast and Mali.  But the difference between Toubab Krewe and others who are inspired by African music is how they innovate on what they’ve learned instead of simply recreating 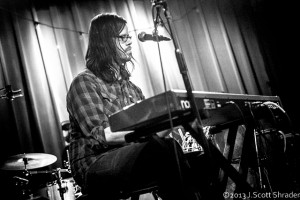 tradition. Toubab Krewe  carves out a new trail honoring the African originators they admire by making something alive and contemporary. If you’re not convinced from the African side and the Ali Farka Toure style Desert Blues along with indigenous instruments that include a plethora of stringed instruments and drums then the Jamband side will suffice. The music echoes the guitar driven sounds of Ali Baba’s Tahini and Lotus. With the absence of singing, the improvisation has to be strong to keep such a ship afloat and it cruises in style. While the ingredients may be familiar, Toubab Krewe cooks up a stew that is pleasantly original and unusually compelling. Remember, the band isn’t composed of a bunch of neo-hippies who enjoyed drum circles enough to take it up to the next level. These musicians lived in Africa studying the music. They beautifully combine their own take on instrumental psychedelia with West African vibrations in a way that simultaneously feels authentic and sounds accessible. 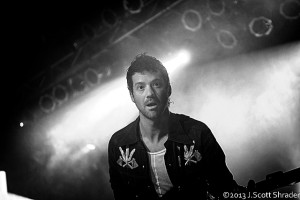 On this cold Winter night I approached The Orange Peel for night 2 of their weekend run. This would be my third time seeing the boys. My previous experience was a delicious dose of cultural cuisine of music at Lake Eden Art Festival in BlackMountain. They invited Andy Hall on dobro and members of Primate Fiasco on horns. Sean Smith stopped by to play trumpet and Adama Dembele on djembe. This night was proof of  their friendliness and down home feel which coincides with global consciousness and defies cultural norms. Constantly shaking hands of fans during an opener is a true statement of love and admiration. These

people were friends, family and new confidants. It’s a true hometown when Justin Perkins can sneak away for a small, intimate musical jam at The Chocolate Lounge just to add a touch to a friends piece before coming back to play to a crowded show at The Orange Peel.

This group is a cultural music magnet that will consistently blow your mind and keep your feet moving. In addition to this and every other exhilarating live show, Toubab proves that they can shine on stage with their inspiring brand of tunes. Find their music at their website www.toubabkrewe.com. Their music will keep you entertained while you are waiting for these guys to come back to town. Their albums are great, but the best way to experience Toubab Krewe is to just see them live. 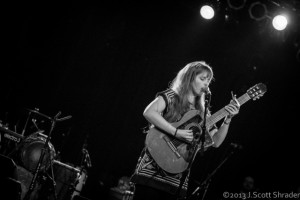 ← AVJ Reviews the Best Christmas Jam of the Past Decade
Adept and Underrated; Camper Van Beethoven reminds The Grey Eagle what true talent sounds like →